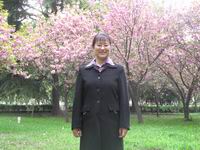 Opposite to the main building 420

Graduated from Xi'an University of Technology in 1982

Received a Ph.D. in Signal and Information Processing from Xidian University in 1998

Received the title of professor in 1998

Received the title of academic leader in 2000

In 2004, he was awarded the title of subject leader in school.

In terms of scientific research, he has presided over the National (Youth) Natural Science Fund Project (Responsible), the National Natural Science Foundation Project (3), the National Defense Cross-Industry Fund Project, the National Key Laboratory Open Fund Project (6), and the National Study Abroad The fund project, the Shaanxi Provincial Science and Technology Research Project, the 15th National Defense Research Fund Project (participants), and the main accomplishers participated in the research project of the National Institutes of Health (participants) and the project of the Chinese University of Hong Kong. In 2004, the Ministry of Education nominated the first prize of the National Natural Science Award, the second prize of the scientific research achievement of Shaanxi Province, the first prize of the outstanding science and technology youth of the Ministry of Electronics, the first prize of the outstanding young teachers of the school, the second prize of the youth lecture competition, etc. reward. The papers were published in "J.VLSI SP", "Computational Intelligence and Neuroscience", "Information Technology Journal", "IEEE Transactions on Information Technology in Biomedicine", "IEEE Transactions on Nuclear Science", "IEEE Transactions on NanoBioscience". 》, Progress in Natural Science, Science in China, Science in China, Journal of Electronics, Journal of Automation, Journal of Communications, Journal of Physics, Control and Decision, Photoelectron and Laser "Applied Intelligence" and a number of academic journals with important influence at home and abroad, as well as a series of internationally important academic conferences such as ICIP, ICNNSP and ICSP.